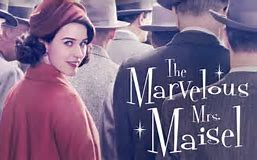 I just started watching The Marvelous Mrs. Maisel a new series on Amazon Prime. It’s a comedy drama set in the late 1950’s about a Jewish housewife in New York City who has it all – a husband, two children and a fabulous apartment on the Upper West Side. It all comes crashing down one day when her husband leaves her for his secretary. Mrs. Maisel then inadvertently discovers that she has a hidden talent of being a standup comedian which her ex-husband aspired to be himself. It’s heartwarming and funny. On watching the first episode, I thought this is as good as any Broadway show.